I’ve been making great use of my snow days this week. Yeah, right! I have been working a little, but I don’t want to talk about that. I want to talk about my Facebook adventures again. I think I mentioned before that networking sites, like Facebook or Classroom 2.0, are an earnest facet of our networked world. I am finding that this new social environment requires some new social skills. I’m serious. Which fork do I use? Did I just lift my red wine glass and ask for white? I’ve been winging it and relying on my instincts – which consist of everything my mother tried her best to teach me, bless her! But what I am wondering is if I look like the country cousin come to online town? Is there an Emily Post for social networks? 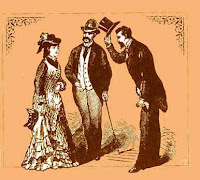 I searched for some discussion of Facebook netiquette and found a few that were pretty good, some that offered smatterings of direction, and others that were just downright socially retarded I don’t care what network you’re hanging out in. I had some specific questions I needed answered, like when you make a new friend should you immediately write on that person’s wall – kind of like a hug – and who should be the first to write, the initiator or the accepter? How good of a F2F friend do we need to be before it’s okay to comment on pictures they post? How do you politely deny a friend request? My Facebook world has become real for me. I’m starting to care how things go there. It has defined itself as more of a personal network consisting of family and very old and very new “non-work” friends. I point out the non-work, because I started playing with this for professional reasons. But, it’s personal now. I believe the line between the two is defined by each individual – as Scott always says, “That’s why they call them personal computers.”
So, here’s some of the stuff I found.
Friending: According to
LifeHacker Blog you shouldn’t friend someone with whom you have no connection whatsoever. If you do, you are a “creeper.” Operative word here is CREEP. Okay, I’m good with that. However, it begs the question, what is a connection? I joined the New England Patriots fan club. Is that a “connection”? For me, no. The Envirostats site recommends purging friends once a season. Really? Man, I wish we could do that with family. Aahhhh . . . and this brings up an even more important question. What is a Facebook season?
Speaking of “creeps,” there is much chat about not being perceived as creepy. This is stuff I want to know. What is considered creepy in Facebook. I’m finding that the standards are much more sophisticated than we may have been lead to believe. For example, most sites recommend “poking” with moderation. “Poking” in Facebook is much like it sounds – like walking by a friend and just saying HEY. However, one site said that poking someone was considered flirting. Oops! I hope my nephews don’t get the wrong idea. Another site said that poking was “old school.” Geez, the last thing I want to be is “old school.” Honestly, I like getting pokes! Just as I am thinking about my friends when I poke, I assume they are thinking of me. (Hopefully, not in a creepy way!)
Here’s a friend issue that is kind of delicate. When is it okay to mention something you learned about a friend from his or her Facebook profile? Can you say, “I saw on your Facebook that you and Harry broke up. You doing okay?” Can you say that? If they have written it on Facebook, then one could assume it is there to be shared. Is it okay to look at someone’s pictures they’ve posted – moreover, can you comment on their pictures? I’m guessing that is why they are there. Many sites mention a thing called “Facebook stalking.” Where’s the line between stalking and getting to know someone via their profile? Here’s my M.O. When I have a new friend, I check out their site and usually leave a comment on their wall. It is a rare thing for me to travel back to their profile 10 times a day to see “what’s new.” But that’s just me. I assume that my friends are checking out my pictures and whatever else may be going on – isn’t that the point? 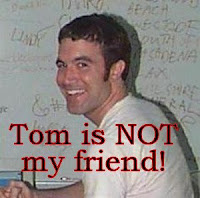 Another topic that popped up often was the size of your friends list. (I . . . nevermind.) I’ve tried to avoid concern about the size of my friend list. Supposedly in Facebook, the number of friends you have is not a measure of your popularity on networking sites. Who are we kidding here? We all know the anxiety that comes with eating in the school cafeteria. But I have really tried to not friend just anybody in an effort to grow my list. I genuinely want quality, not quantity. I also find that these “fillers friends” can get in the way. I don’t have all day to hang out on Facebook. I want my wall to be populated by information about my “real” friends.
There are several pieces of advice that pop up over and over, and I think they make good sense.

I still don’t have answers to some of the finer points, like who writes who first in a new friendship or even if you are expected to. However, most of my research showed that if we just stand by common courtesy and social savvy, we are doing the right thing. So I am going to keep “just winging” it and pray that no one thinks I am CREEPY.