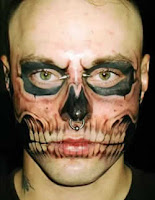 As you read the title “Digital Tattoos,” what do you image? Are you thinking of a tattoo that is easily removable from your body because it embodies the mythical and ethereal traits of all things digital? Something you can change on a whim?  OR . . . do you think of something you have put on the internet (or has been put on about you) that you can never remove, no matter how hard you work, there will always be a telltale scar? Where did your mind go?

Now, imagine you are a teenager who is still developing a sense of permanency and thinks tattoos are super cool – the more the better – especially the one on the side of your neck.
I have so many things I think about the whole idea of a digital tattoo, that I’m not sure where to start. Making comparison and contrast to an ink, body tattoo brings some tangibility to it – and may also open up some unusual perspectives.