Are We Any More or Less Comfortable With Technology? 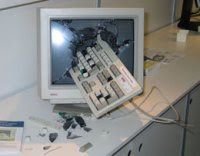 Are we any more or less comfortable with technology?  I have been asking myself this question for the last couple of weeks.  I like to think as educators that we are, that we have seen enough and been exposed enough that we no longer fear the unknown, that it is not unknown.  I also like to think that as educators we understand that it takes time to learn something new. But, gosh, I am not sure. Or am I mistaking fear for frustration – or is it the same thing? Where is the “negative” about technology still coming from?
Recently I did a couple of workshop sessions on social networking tools.  They were short sessions, 45 minutes. So there was not an opportunity to get into the meat of the tools (plus they didn’t have computers), but we would certainly be able to talk about the possibilities and what other educators were doing.  The first session went great.  There was much discussion and sharing.  The questions were positive and insightful. We laughed. We cried. I was blown away. Really.  The second session, however, was not so great – at least I didn’t think so.  I don’t know. Maybe they were hungry since it was right before lunch or they were just over “technologied” or something.  But there was not much about this group that was fun or positive.  It was pretty clear that they were frustrated and kind of angry.  But why?  I had only just walked in the room – been with them maybe 5 minutes.  Surely I had not had a chance to make them angry, yet.
It all started with the first comment after we watched a short video on the power of technology.  I can’t remember the exact words, but it was along the lines of, “Technology is not necessary and takes up a lot of time.”  I agreed that sometimes, that is the case.  I don’t always need a pen or a book or even a chair to learn.  Think of it as just one tool that is available to you and your students. Trying to get the conversation back to social networking, I mentioned Facebook as a jumping off point. Pretty much everyone in the room had an account or knew what it was.  Facebook is an example of the power of social networking. Imagine having just a part of that energy in a classroom or a school?  They looked intrigued. Yeah!  We were on the right track.
One participant, however, was not okay with going past this point. He did not have Facebook and felt that this conversation could go no further until he fully understood.  No definition or quick look or description was “okay.”  At one point he commented that if he has one student that doesn’t fully understand, he goes over and over it.  That’s wonderful!  I applaud him, sincerely.  I do that, too, if I can.  But, this is a workshop on social networking on a Saturday morning, and it’s almost lunch time and we are quickly running out of time to talk about social networking tools for educators. I suggested that this class might be a great way to get familiar with terms and start to build a foundation and big picture for this topic. Other students chimed in that understanding all this can’t happen in a day. (Thanks to those wonderful people.)   I could see his frustration building, but without completely turning the class into a Facebook lesson for him, I just couldn’t seem to find a way to get him to relax and just let some things stick to him. I could not convince him that he didn’t need to be able to use this particular tool right now to benefit from the discussion.  There were more, similar sticking points. In fact, he had a whole pocket full of them, such as they just didn't have time for this in class and there was no practical application for them. Anyway, you get the idea.  This teacher was not happy.  And, I don’t think he’s alone, I also want to say.
I am still thinking about this whole event, obviously, and trying to make some sense of it. I am trying to figure out why this wonderful teacher (and I know that he truly is a great teacher) needed to essentially hijack this workshop to find release.  Maybe this was a cut and dry combination case of poisoned well syndrome and too much technology for one day.  The first comment was negative and everyone just went rogue from there.  That is the LAST time I do a workshop right before lunch!!  Toward the end of the workshop, one participant shared about an article he read that said schools won’t be able to afford technology soon and they will have to make a choice between teachers and technology.  Talk about a slippery slope!  How did we get from technology is time consuming to integrate to that machine is taking your job and there is nothing you can do about it. Kill the machine!  Okay, so they weren’t screaming “Kill the Machine” at the end, but you get the idea.
So I am back to my original question:  Are we any more or less comfortable with technology?
Just Wonderin'
Lee Anne
Posted by Lee Anne at 3:35 PM 7 comments: Links to this post